Description: The witness was outside stargazing. He said that he is an amateur astronomer and has been doing astronomy for over 50 years. He noticed the Moon and Jupiter. He then saw two very bright lights to the southeast. He said that the lights were brighter than Jupiter. The lights were not moving and abruptly vanished in 10 seconds. Jupiter was located to the left of the lights. He also stated that a few clouds were in the sky, but stars were visible. The witness called Patrick Air Force Base, but wasn’t able to reach anyone. He didn’t think that the objects were from a rocket launch. He is familiar with rocket launches as he lives about 20 miles to the south of Cape Canaveral.

The post 2 Stationary Bright Lights to the SE Abruptly Vanish. appeared first on . 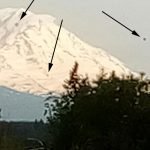