Description: A motorist was driving northbound on I-5 near Mendota, CA. Ahead in the distance he saw 3 bright lights in vertical formation. Then the lights flew over him and to the west. They were no more than 1,000 feet above the ground. The lights were white and appeared to be in triangular formation. The lights were 300 to 600 feet apart and made no noise. The witness tried to pull over at the West Schields Avenue exit, but was going too fast. He saw an RV stopped at the exit presumeably viewing the lights. He noticed several cars in his rear view mirror that had slowed or stopped. He thought that the cars stopped to view the lights. He viewed the lights in his rear view mirror. He saw the lights hover then abruptly rise vertically and illuminate the clouds. He estimated the cloud bases were near 5,000 feet. (According to recorded weather observations there were scattered clouds with bases at 14,000 feet.) The witness did not know clouds were in the sky until the lights illuminated the clouds. The lights were observed for 3 to 4 minutes.

Note: Crop dusters in this area sometimes can be mistaken for UFO’s. However, the witness said that crop dusting would likely not be occurring at the time he saw the lights. He also frequently drives this route and due to drought no crop dusting has been observed this summer. He also thought that this section of the San Jaoquin Valley was used for grazing and not growing crops. Therefore crop dusting is an unlikely explanation. He did see a posting on social media whereby someone else had seen the lights.

The post 3 Bright Lights Fly West Over I-5 Near Mendota, CA appeared first on .

3 Groups of Up 30 Bright Gold Balls Fly Down Street. 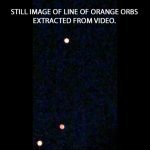 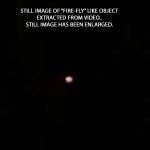 2 Silver Round Objects Fly Side by Side.