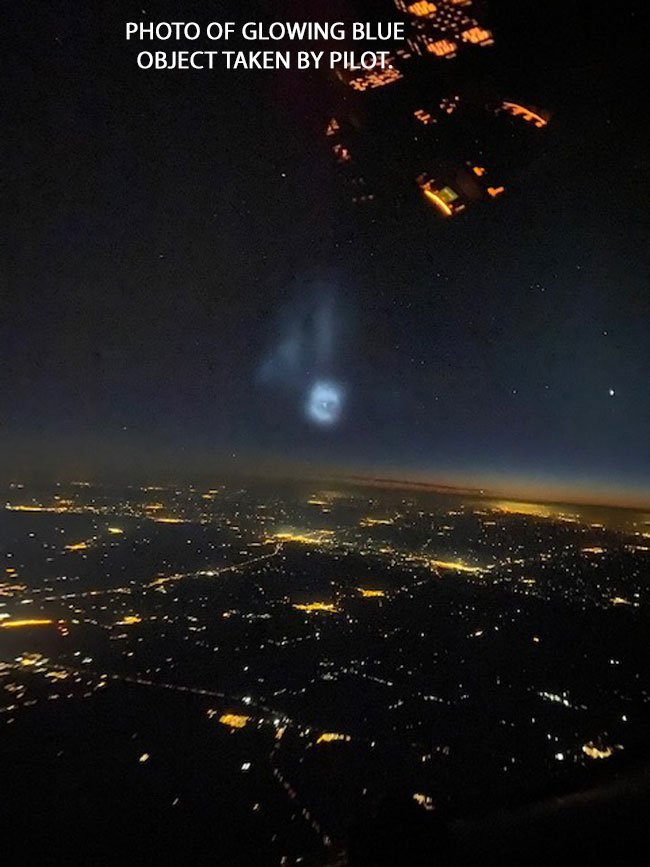 Description: I was flying to the southwest at 20 miles Northwest of Memphis, TN at 00:55Z (18:55 Local) on Jan 31, 2022. We flying from New York to Dallas-Ft Worth. I saw a glowing blue object within a donut formation. The object was estimated at 41,000 feet. The object was at an 11 o’clock position and I estimate was at a distance of 15 to 20 miles. The object was moving about and I don’t attribute this to autokinesis. The center object vanished and the donut formation dissipated a minute later. I was flying at 38,000 feet at a ground speed of 445 knots. Skies were clear and visibility was unlimited at flight level. There was a scattered cloud layer below us at about 10,000. I saw the object for about 5 minutes. The first officer also saw it.

Note: The pilot later identified his own sighting. He found some photos of the second stage rocket booster of the Falcon 9 rocket and said that this looked just like what he saw. A Falcon 9 rocket was launched from Cape Canaveral by Space X at 6:11 PM EST on Jan 31, 2022. An Italian Radar Satellite was placed in polar orbit. The 2nd stage of the rocket was what the pilot observed.