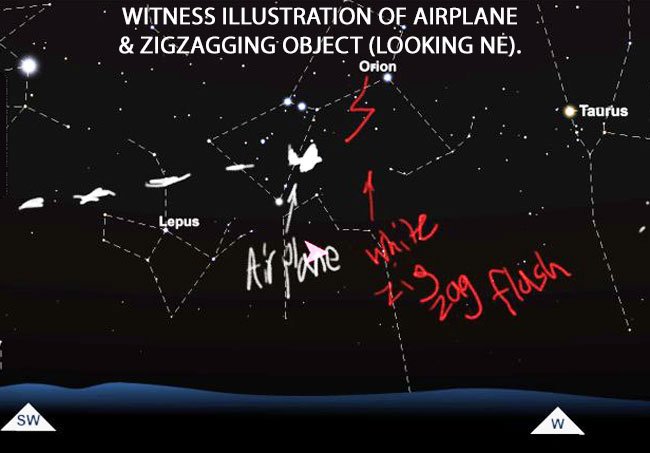 Description: I was outside my home when I saw a zig zag star or whatever. It was few minutes before 5:01 AM and I stepped outside to smoke a cigarette when I noticed an airplane flying from the south to the west then heading north and not to far from it near Aurigas and Taurus. I saw it quick flash down ward left down then downward left I haven’t seen anything move like that so I’m taking the time to write this maybe there was some cameras facing that direction to explain what I saw. I might be emailing the wrong email for this that I’m reporting, but this was strange and thought to myself to go and try and reach out maybe there’s some explanation for this. I don’t really expect a response, but hopefully this was something worth reporting

Additional Information Supplied by Witness: I was smoking my cigarette and looking up on the south sky at the stars and I saw an airplane. I said to myself that plane’s moving pretty fast. I followed it from the south to the west. The plane curved as if it was turning and I was following the plane, but mainly focused beyond looking at the stars. I used this site and turned on the 360 feature and faced it in that direction when I was inside my home. I pointed it in that direction and said it was Taurus and Aurigas. I went outside to smoke a cigarette this morning took my tablet with me this time to take a photo in the exact spot that I stood the previous day and in the exact direction. I used the website’s 360 feature and see that it was in this spot by comparing the photo. It was a bit more left right next to Orion. There were about 2 to 3 seconds of light as the plane that I was following came to that spot that I drew it. The light came downward left then right then downward left. The light was a bit brighter than the stars next to it and a little bit bigger than the biggest star next to the red line I drew.