Description: After completing a tour of the Vatican, we noticed several bright sparkling lights hovering in the sky towards the south. They were unusual enough for us to take a few videos and photos, but we assumed they were some type of drone. With the recent attention to the UAP phenomenon, this event was brought to mind and we decided to go back and look at this footage (for the first time). Not only does the footage show the sparkling objects hovering, but there are multiple other objects that we did not notice at the time. At the 18 second mark there is a dark circular object that maneuvers left to right at seemingly high speed just above the statues. We noticed several more objects descending from the top of the shot toward the ground at high speed. Some appear to be in pairs (moving at different speeds). At around the 20 second mark there is a much closer/larger object just above the statues, but is only seen in approximately 6 frames. I ran some visual recognition software over the video and it shows as many as 30 additional UAPs descending from the top of the video toward the ground, always moving left to right – with some making some course corrections. I hope this helps someone identify what these object are. (Note my phone was still on Melb time hence the timestamp difference.)

Note: We are trying acquire the photo and video footage. Updates will be posted. 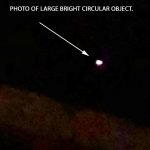 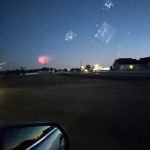 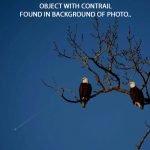 Circular Object With Tail Found in Photo of Eagles. 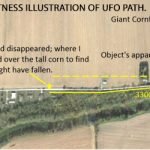