Description: The sky was very clear. I’m looking up just admiring God’s handy work, and then I notice this trio of stars. They stood out because they appeared to be moving. As I continued to gaze up, I realized that they were in fact moving and that they were in the shape of an Isosceles triangle. I took my phone out and try getting a video, but I fumbled around with it, trying to get it on night mode. I missed the opportunity, but I know what I saw. They were moving in perfect sync. They weren’t that bright, and they appeared to be at a very high altitude. They were traveling North. One star was in the front, and then the other two were evenly spaced in the rear, which would have been South. I was able to see it for about 30 seconds before all the fumbling with my camera happened. I’ve never seen anything like it before.

Note: There are some Naval satellites that fly in triangular formation. They are high and not very bright. However, I don’t know for sure if the witness saw satellites. 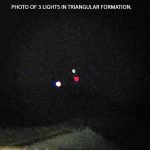