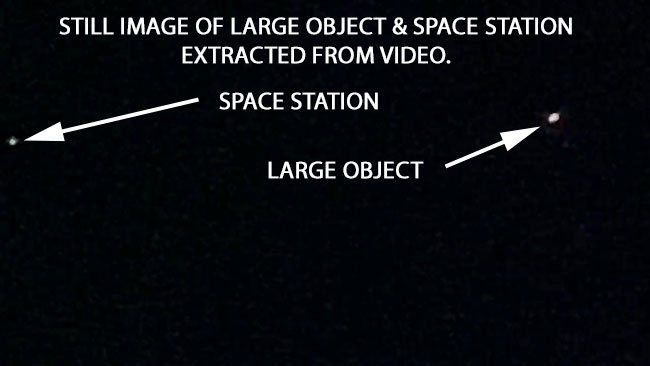 VIDEO CLIP OF LARGE OBJECT APPEARING AHEAD OF SPACE STATION.

Description: I was in my backyard to get a sighting of the International Space Station (ISS) on the evening on Monday, November 22, 2021. The ISS came into view at exactly 5:27, just as shown by my ISS Tracker app. I watched it with binoculars, and then since my iPhone was with me, I decided to video the satellite. It’s bright like Venus only moving. It was a good sighting, lasting about 5 minutes. While I was videoing, a larger object, moving faster, came into view. It’s in my video. Too bad I wasn’t using a tripod. It’s a wobbly video. The other object seemed to come straight up out of the horizon and then moved horizontally, ahead of the ISS. It was moving faster, so I couldn’t keep them both in the viewfinder. Since I can watch the ISS most anytime when it passes over, I started following the other thing with the video. I have no idea what that was. It was quite a lot bigger than the satellite. It was roundish. It was not an airplane. I didn’t want to call it a UFO, but I learned on the internet that the ISS is the biggest satellite, and also the lowest orbiting satellite. So what I saw was not another satellite. What do you think it was?

The ISS first came into view on SW horizon at 5:27 PM, and I watched it moving to the north in a large arc that would end on the NE horizon. The larger moving object showed up when the ISS was high to the west, at about 5:31 PM. It’s trajectory became similar to that of the ISS, but it was going faster.

I’ll send my video. Once I was videoing the unidentified thing, I tried to zoom in on it, which is why it appeared to lurch and get bigger in the video. After about 20 more seconds of video, I went back to my binoculars since it was hard to see anything on my phone’s screen. About 25 seconds later the unidentified thing went out of sight behind my house, to the NW. So there’s about 20 seconds of the thing on this video.

My location is about 10 miles north of Wellington, CO. I’m about a mile south of CR82 and a couple miles west of I25.

Please let me know if you need additional information, and especially if you can tell me what I saw. Thank you!

The post Large Object Appears Ahead of Space Station. appeared first on . 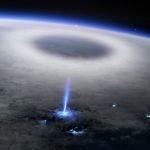 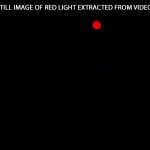