Description: I was in the outside hot tube, relaxing. I had the water jets going so I couldn’t hear small noises. I was looking at the stars, occasionally looking around. Then I looked up, and many stars were blacked out (maybe 30% of the sky). There were NO lights. Whatever it was, it was slowly moving. By careful watching it appeared to be a triangle shape. At the edge the stars were visible, then there were blocked. Blocking wasn’t gradual. It was not a cloud. It was big since it blocked so much of the sky. I did not hear any sound from it above the water jets. It gradually moved away in a NE direction. It had blocked stars for a half hour at least. My location was within 10 miles of Davis-Monthan AFB. There were no lights- so it probably was not military. I was working at Raytheon as an engineer with a clearance.- I did not report it. I did tell my wife who was inside the house and she recalls that.

I got no picture. There were just blocked stars, MANY blocked stars. It was not fast and was moving at maybe walking speed. (It was Not a blimp.)

The post Large Triangular Object Blocks Out Many Stars. appeared first on . 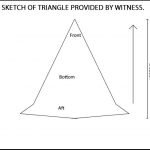 Triangular Object With Red Orb on Each Corner.