Description: I know this is a past report, but feel it is important to record because of it’s effect on Nature. It happened on our normal weekend (overnight stay) fishing trip in the isolated Florida Everglades. The location was on the Southern end of Whitewater Bay, a large circular shaped body of salt water about five miles in diameter. While fishing with my deceased Brother-In-Law (James Duke) near midnight, under clear skies, near midnight, we noticed fish started swirling at the surface, some jumping out of the water. This condition increased in activity for about 15 seconds, enough time for us to mention to each other, “what’s going on?” Suddenly, in the Western sky, we noticed a glow on the horizon. This “glow”, was WHITE light, that increased with intensity, as it came directly over our boat. As it passed over our boat, I noticed the intensity was strong enough to light up Whitewater Bay, because I could see the North shore of Whitewater Bay and fish jumping as far as I could see! I couldn’t believe there were SO many fish in these waters we had fished for many years! The object(?) and glow disappeared in the Eastern horizon, as fast as it was first seen. Darkness returned and slowly the fish stopped jumping and swirling on the surface of the water. Our best guess at what we had seen, was some kind of space junk returning to Earth. Having only a marine VHS radio on board, we knew we would certainly hear about this when we returned to the dock the next afternoon! We talked about how much damage “this thing” must have caused to wherever it hit.

After returning to the dock (Everglades National Park) the next afternoon, we started asking people as we cleaned our fish at the parks facility. No one, had any knowledge of seeing, or hearing of any such happenings!!

Another fact, a VERY light “whispering” noise could be heard AFTER it passed overhead. This “whisper noise” we heard, was delayed maybe three of four seconds after “this light” passed overhead. We looked in the news papers, we found nothing! We were sober too! 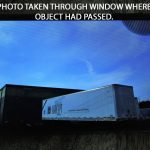