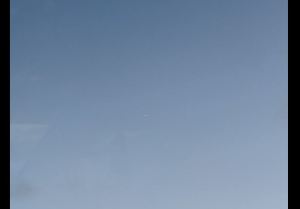 Number of UFO(s), including the Color(s), Size(s) and Shape(s): One object as far as I could tell.
White in colour and brighter at either end.
lozenge-shaped/long tic-tac
No contrails, no wings, no tail
Changed direction slowly but jumped position quickly

Distance of UFO(s) in sky: Unknown

Direction of Travel for UFO(s): North to North-West

Other Known Object(s) (For possible reference, or contrast): None

Further Description of Sighting: The object filmed traveled North to North-West on the Eastern side of the M1 just North of Northampton.

At first I was traveling North on the M1 and had initially see it before Northampton for a split second before it went behind a dark cloud. It then reappeared again maybe 10 to 15 minutes later and as it grabbed my phone and turned to film it it had gone. Nowhere to be seen. Then 30 seconds after that it was almost stationary in the sky some miles North. As I traveled North the object stayed on the Eastern side of the M1 and it is then I managed to film it for a short period before it moved forward again (out of shot) and faded away in to the distance maybe North East direction.

One object as far as I could tell.
White in colour and brighter at either end.
lozenge-shaped/long tic-tac