Description: My family and I, wife and two young sons at the time, about 2005 (would need to verify with log book), flying back from Peoria to Chicago Executive airport, mid-day, with some clouds, at about 3,000 to 4,000 feet on an IFR flight plan (tracked on radar and advised for separation from other traffic), witnessed a floating inverted “V”, black object. It was close enough that we should have been advised if seen on air traffic control radar, as it was at about the same altitude. It was at least similar in size, magnitude, as the Cessna 182 aircraft we were flying. I did not turn to chase it, as I was on a flight plan and following it. In hindsight, I should have turned and taken pictures, as no one believes us. This was about late afternoon with plenty of daylight,, and only a few clouds. I have never found out what it was. 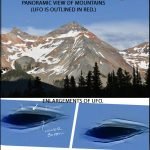 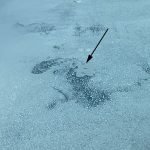 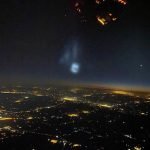