Description: A man was taking out his trash and to the south he saw an object with tangerine-orange lights coming towards him. The object made no sound and was flying toward him at an altitude of about 400 feet. The witness could hear traffic noise in the distance, but the craft made no sound. He was certain that it wasn’t a jet, helicopter or drone. The witness estimated that the craft was flying at about 70 MPH and was about 1.5 miles away. The craft then banked toward the east. He said that the craft initially looked to be diamond shaped, but appeared to be rectangular shaped after it turned east. He said that the object was gun metal gray and had railing on the bottom. There were orange lights on the ends and a yellow light in the middle. He said the craft was about the size of a city bus and had a height of six to eight feet. The witness then went to call his wife to look at the craft, When he returned the object was gone. He estimated that his sighting lasted about 30 seconds. Skies were clear at the time of the sighting. He conversed with neighbors and they didn’t see anything. He called the police and they forwarded his sighting to the county. He hasn’t received a response from the county.

The post Rectangular Object With Orange-Tangerine Lights on Ends. appeared first on . 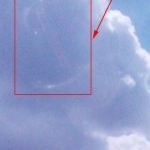