Description: I first noticed two red lights in the sky and thought it was an oncoming plane. But then I noticed the lights in the sky weren’t m0ving. So, I went to the lanai window and opened it to get a better view. The object then began to move from South to North.

The object was bright red all over, no apparent appendages/fixed landing gear, and no sound. It ascended and descended several times and periodically emitted bright blue light rays from the rear end of the object. It was definitely NOT an airplane or helicopter. Perhaps it was a drone, but if so a very unusual one.

It flew around, going up and down and twice flew towards the East and back. This lasted for at least ten minutes. Size? It was bigger than a bread box, but not as big as a regular airplane. 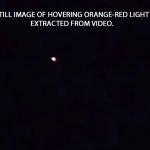