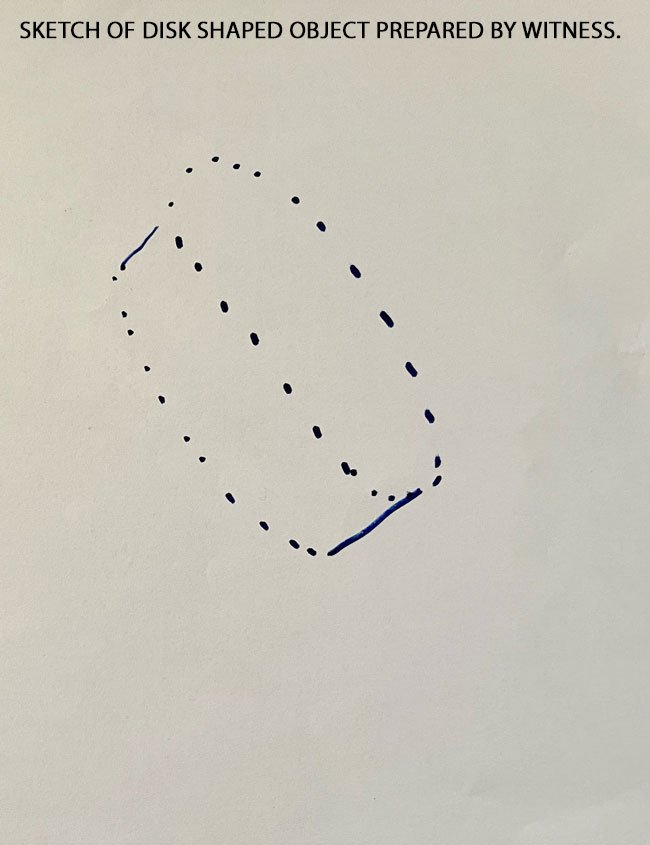 Description: On July 11, 2022, I was in the backyard of a friend’s home in Lake Balboa (in the city of Los Angeles), California, and while observing the International Space Station, I suddenly saw something very unusual, so unusual that I immediately began to watch it instead.

The location was near the Van Nuys Airport in the San Fernando Valley, at the home of an artist friend, cross streets Gaviota and Saticoy. My college friend Sally had called me about 9:45 PM from near where she was staying in Mineral King at her family’s cabin (close to Yosemite), and suggested I look for the International Space Station as it came from the southwest, beginning at 9:59. She said it would be visible for about seven minutes and would look very bright, unmistakeable. I turned out all the yard lights and went outside.

I saw the ISS come from the southwest and when it was crossing directly overhead at about 10:03 PM I saw a very unusual sight, a round disk coming from the east, flipping over and over, like a coin, its trajectory horizontal, and somewhat perpendicular to the path of the space station, and heading in a westerly direction. There was light emitting from lights on it’s two parallel edges and it appeared to me that it may have been lower in the sky than the space station, as I could see it’s shape and it’s tumbling motion. Although it is difficult to judge size and distance (is something faraway and big, or closeup and small?), it appeared to be very high up, to me. But it all happened so fast – size unknown. I was so awestruck that I didn’t think to film it until it was farther away, and when I held up my iPhone to film it, I saw that it’s shape and tumbling motion was not visible at that distance.

I got about 25 seconds with my iPhone 12 Pro Max. I zoomed in and made the background black. It is just a speck from my now faraway vantage point, but I think I can actually see rotating going on, even at this great distance. I lost 15 seconds of the original footage by my editing (although all the original can still be retrieved). In the original video the sky looks grainy and you can see two electric wires. If you would like to see the original video, I will send it.

Although it is just a speck, I think I can see it turning, but from so faraway and at such a different angle, the disk form, lights, and flipping end-over-end motion are no longer visible. You will see nothing for 10 seconds, then a white speck will begin to drop from just left of the right top corner of the video frame for 10 seconds. It is not actually dropping but moving farther away. You will probably think that you don’t see anything remarkable.

I shared my experience with an amateur astronomer friend, Randy, who asked if I thought it might be a drone. I have only seen drones on videos and since July 11th, I have looked at many, even ones purported to be UFO-like, but I have seen nothing at all that either looked or moved like what I saw and I don’t think it was a drone. Randy also said that, because of the direction it was moving, it would not have been another satellite. I also spoke to an air traffic controller at the Van Nuys Airport. He said that they had “received no reports” and when I said, “Oh, I just realized that your field of vision is east – west – north – south, not straight up, so that may be why no one saw it.” He said, “I cannot discuss where we are looking.”

None of my 4 friends who were watching the ISS in different cities or locations saw what I saw. My friend who was present at the time saw it and he said that my simple drawing is a good rendition of the form of what he saw.

After finding your site, I thought to share my recent experience with you. I could send the original footage. If you like, you may publish my story 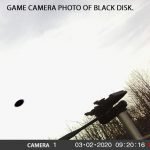 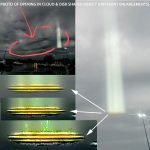 Hamburger Disk Object, Black on 1 Side, Silver on the Other. 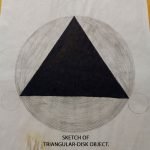