Description: The description of my sighting follows:

An Encounter With an Unidentified Aerial Object
In one of these summers, 1961, 62, 63, or maybe 1964, when I was between 14 and 17 years old, I biked, as I did many times each summer, from my home in Fremont, Ohio, twelve miles to my grandparent’s farmhouse just south of Fort Seneca, Ohio, riding for safety on the back country roads between the two points.

To this day, I distinctly remember all that I will recount. At the time, I perceived that if I solved the apparent problem I would be able to gain $75 dollars for my efforts. However, I was never able to gain that monetary reward, as I shall describe. For all these years, the incident has been precisely imprinted on my memory.

One summer day, in my bike travel to my Grandmother’s house, as I always did, I biked at one point toward the west, toward the tiny town of Fort Seneca, and State Route 53, along County Road 30, in clear blue-sky weather.

At one particular point, immediately after passing North County Road 33, and it’s bridge over the Sandusky River just to the south, I happened to look up into the blue sky above me and saw a circular, metallic object hovering over me, at a slight angle to the north. I was interested in science, physics, and aeronautics. I immediately tried to understand what I was seeing. I stopped my bike and looked up, to get a better view. Quickly, I grinned. I knew what it must have been. I could identify it.

Not long before, I recalled reading a story telling that at major airports the U.S. Weather Service commonly released helium-filled weather balloons, from which atmospheric conditions were detected and radioed to the ground. With this information, weather for aircraft negotiating landings and takeoffs, along with point to point flights, could be accurately predicted and described. Important and essential meteorology at the time. And, for me, this would provide a nice reward. The article said that the weather balloons were configured to slowly deflate and drop back to the ground, often many hours or even several days after having been released. Citizens were to know of this, because if a landed weather balloon were discovered, a reward of $75 would be granted to its discoverer. I was in business.

Because of it’s shape (circular) and color (metallic), this had to be one of those weather balloons. I would merely wait for it to descend and hit the ground right there in Seneca County, and I’d have a $75 reward. It appeared to be only about 200 to 300 feet in the sky (as best as I could estimate from typical 60-foot silver maples along the roadway).

But, the object remained motionless in the sky. If it was descending, it was doing so at a very slow, imperceptible rate.

But I was almost directly underneath it; could only see its disc-like silhouette. So, I got back on my bike to peddle down the road a bit, so I could see it more from the side, to see it’s vertical dimension.

But the object didn’t cooperate. As I started to peddle down the road, the balloon started to move above me, with me, in exactly the same direction and speed. Ah, some winds were now pushing it along, right in my path on the road. The balloon continued in this path, for what I have now measured (on Google Maps), for about 3,300 ft, about six tenths of a mile. I rode my bike at about 12 mph, so I got to watch this balloon also move at 12 mph, for about three minutes, trying all the while to get out from beneath it.

But, then, I looked up once again, and it was gone. The sky was clear blue, and I could see in all directions. I scanned the entire horizon encircling me. Quite obviously, the balloon had deflated and fallen quickly, crashing into the adjacent cornfield (to the north). This would have been late July or August, because the corn was fully tasseled and tall. On the side of the road I put down the kick stand of my Schwinn bike and then tried to stand taller with my feet on the pedals. By thereby standing on my bike I could peer over the corn and hope to discover where the balloon had crashed.

But to no avail. The crashed weather balloon was nowhere to be seen. I could see in a radius of a half mile or so over the big, flat corn field. Apparently, the balloon had collapsed down through the corn stalks and was laying somewhere on the ground. The area was too big for me to go wandering between the corn rows to try to find it. If the farmer found me in his corn, I’d be in real trouble.

So, I got back on my bike and peddled on to Grandmother’s. I missed my chance of getting the $75 for recovering the radio equipment on a US Weather Service weather balloon. Later, I mentioned all of this to both my Grandmother and then to my parents. They said nothing, knowing that I really liked science and that there probably really were downed weather balloons to be recovered. End of the story.

Except until many years later, in either 1967 or 1968, when I heard an interview on WJR Radio (Detroit, MI) of J. Allen Hynek, an astronomer from Ohio State University, who had been an advisor to Project Blue Book, a long study of the many reports of “unidentified flying objects,” UFOs.

There had been some UFO sightings at Dexter, MI, so WJR interviewed Dr. Hynek about the matter. I listened with interest, but until Hynek mentioned something, I made no connection to the “weather balloon” I encountered. Then, he said that some reported UFO sightings, in the daytime, were of “daylight discs,” the “flying saucers” of renown. He mentioned that they often hovered silently, then would quickly fly away, unseen.

Instantly, while Hynek was describing what the flying saucers, the “daylight discs,” looked like from the ground, memory of my “weather balloon” came to mind. What I saw was now obvious. The metallic disc hovering above me for about three minutes was not a weather balloon at all. It was a UFO, a “flying saucer.”

I recalled that on the bottom of the “weather balloon” was an inner, smaller circle. At the time, I presumed this to be location of the weather radios that I would recover. Not at all.

Here’s the annotated path I took, from right to left (westbound), while watching for my weather balloon to descend (which it never did):

WITNESS DESCRIPTION OF PATH OF UFO.

Of significant note is the path of the object, over me and just to the north, in the large
cornfield, paralleling the road. With me, as I peddled from the point of discovery (on the east), to the point of disappearance (on the west), it was moving at my peddling speed, about 12 mph, for about three minutes. However, in summer, winds at this location seldom come from the east in good weather. They are commonly west to southwest winds, directly opposite the path of this aerial object. Simply, winds cannot account for its three minutes of motion above me, to the west, against any prevailing wind. In fact, there was no prevailing winds of any strength or duration that day. Having ridden this
route numerous times before, I was aware of the extra effort needed to peddle against 10 or 12 mph winds. As always, I checked the wind speed forecasts before I left on this journey. I always refrained from biking the 12 miles to Grandmother’s when winds were against me,
higher than 10mph. So, in summary, whatever the object was (it was not, by any means, a “weather balloon”), it violated at least two physical phenomena. First, of course, it remained suspended in the sky, without any discerned expenditure of energy. All the while, the object was silent; nothing heard from the ground. The object would
have been between 200 and 300 feet in the sky. Had there been any machinery elevating it above the ground, it would have been heard. That’s exactly why I presumed it to be a descending weather balloon. Those are held silently aloft by the buoyancy of their inclosed helium. But this had none. It was not a balloon 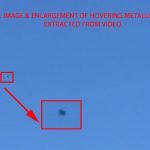 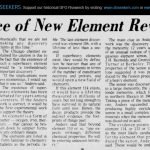