Description: This statement is a true statement and I swear upon my soul and those of my dearest depart that this statement is a fact – as far as I can judge it to be – at least regarding to the present reality and dimension that we as human beings find ourselves in.

I had been awake for some 3 to 4 hours ponderously looking from the bed, out through the semi-open blinds at the early morning sky. Sometimes in the distance I can see the planes that are like specs of dust, they are so far away. This morning, today I watched what I thought was one of these planes, but it wasn’t shooting across the sky, it appeared to be heading towards me! As it got closer it was gaining size as it approached. I thought: “this can’t be possible!” Then I thought “My God!” It’s gonna crash into the house! My next thought, as I began to sit up in bed, was that it must be a helicopter and that it was low and passing over head? At this point let me state that we are not far from Great Falls airport and that the Malmstrom Air Force Base is only about a mile from where we live. Yet, it wasn’t a helicopter and whatever it was came to hover maybe 50 feet from the back window. On its underside were a mixture red and white lights that were randomly bouncing about on whatever the electrical system was. There was not a sound. It was absolutely silent. At this point I was in the process of leaping out of bed, running towards the window. As I frantically pulled apart the blinds it vanished without a sound from view. At this point my wife was hollering at me, asking me what the matter was. I wouldn’t declare that it scared me, rather that it was mainly unsettling, to say the least. I stood at the window for a long while staring into the approaching dawn. No, I was not dreaming, and it was not sleep paralysis. I have encountered that phenomenon twice in my life and can tell that that phenomenon was far more scarier in its encounter. No, I was wide awake. I know that I experienced something. Let me declare here that I am very aware that the mind can play tricks on one. I’ll give you an example. About six months ago I felt my wife roll over. I thought she had got out of bed and was needing the toilet. I saw the image of her pass the bed and I called her name and asked her if she was alright. She looked at me but said nothing and went into the toilet. She seemed to be in there for a long..loooong time. I simply presumed she had vacated the toilet through the other door, got up and had decide to go to her computer. Suddenly she rolled beside me and at that point I realized that she hadn’t got up at all! I think in this case I expected her to go pass the bottom of the bed so my mind conjured her image which was of my expectation. That seemed plausible, and I am wondering if the scenarios are similar. I am not one for random flights of fancy. Those who know me I’m sure will attest to that fact. Yet the strange experience of the craft with it’s rotating lights was an absolutely vivid image. Sometimes, I guess, some things have to remain unanswerable. But it was an intriguing experience to say the least. 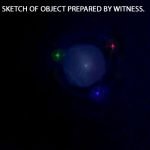