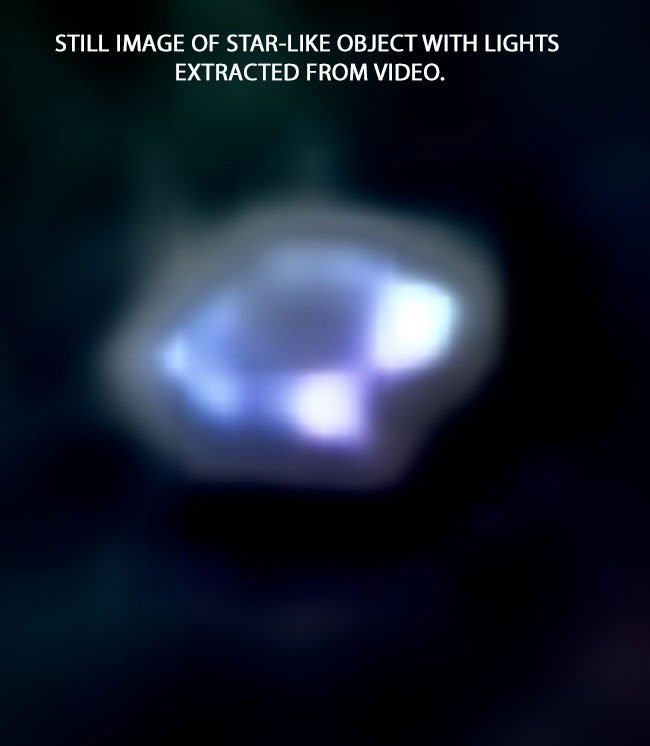 STILL IMAGE OF STAR-LIKE OBJECT WITH LIGHTS EXTRACTED FROM VIDEO.

Description: I was in my hot tub and thought the stars looked really pretty. I took a photo. I noticed one was really twinkling, so I took a video of it. When I looked at the video, I saw it had lights or something on it and it was acting crazy. I took still shots from the videos and it looks like there are lights on it. I have never seen anything like this. Maybe it was a satellite? I don’t know. It was really pretty awesome though. I have about five videos of it. I took the first one at around 6:00 AM and then as it got lighter I took one at almost 7 AM in the same spot. You could still see it in the video when you enlarge the screen, but not really if you were just looking up. If you looked up, you could just see a “star” really twinkling. Please excuse the graininess, but it was from my iphone camera set on the highest zoom setting in the dark. I am sending a still I snapped from the video. You can actually see heat from it. If you enlarge the item in the video, you can see what looks like lights. I have about five more pictures I took from the video and more videos. If you have messinger, I would like to send the video. It says that it is too large to send here. Thank you. Have a blessed day.

Note: No bright planets were visible at the time of the sighting. The witness stated that the object looked “star-like.” When zoomed in, the object appears to have a strange shape with multiple lights.

The post Star-LIke Object With Lights. appeared first on .

Double String of Star-Like Lights Move Like a Snake.