The following case file was written by BJ Booth of UFO Casebook, and is used here with permission. It can not be reproduced without prior permission.

Dayton, Ohio brothers Orville and Wilbur Wright were always interested in being able to soar in the skies. Being influenced by printed material of early German attempts with gliders, the two experimenters built their own glider in 1900.

Early on, they tested different types of wing shapes, while honing their plane-making skills. By 1903, the brothers had built a 12-horsepower engine and two propellers.

Late in the year, on December 17, they finally made their first flight.

Though tagged as a plane, their first success in flight was actually done in a motorized glider.

The flying apparatus had no way to steer it. The two had gained experience in motors while experimenting with motorized bicycles operating their own bicycle shop.

The first historic flight at Kitty Hawk lasted only twelve seconds, but it was a start. By 1905, the brothers could stay in the air for up to 30 minutes, and even steer their plane.

As far as we know, no one else had developed the capability of sustained air flight, at least on this planet. But early accounts of our first settlers included an occasional report of something flying in the sky.

These happen chance sightings were normally made when one would check the sky for weather conditions, or see birds fly over.

One of the very first sightings of what could be a UFO occurred as early as 1865, over 35 years before the first known flight at Kitty Hawk. Fortunately, there are still newspaper accounts of this and other early sightings of days long since passed.

The Missouri Democrat dated October 19, 1865 gives an account of the sighting of an unknown flying object under the headline of “A STRANGE STORY-REMARKABLE DISCOVERY.”

The story was reported by one James Lumley, who was a trapper.

The report stated that “if” what Lumley reported was true, it would shake the foundations of the scientific world. Lumely claims that in the middle of September, he was trapping in the mountains at a location about 75-100 miles above the Great Falls of the Upper Missouri River.

Just after sunset, Lumley saw a “bright, luminous, body” in the skies. This body moved very quickly to the East. After five seconds, the unknown object burst into pieces. He soon heard a thunderous explosion followed by a “rushing sound.” This explosion shook the ground. He could smell sulphur in the air. Though impressed by what he had seen and heard, the next day would bring even more remarkable discoveries.

About two miles from his campsite, he could see a path cut through the forest. Whatever had come through the area had leveled everything in its path. He soon discovered the cause of the great destruction, a giant object which was made of a rock-like material.

This object had been driven into the side of a mountain after ripping through the forest. This was much more than an asteroid or comet: the object was divided into compartments.

Also, hieroglyphic-like symbols could be seen carved into the object’s surface.

He also discovered fragments of what appeared to be glass, and strange liquid-like stains located in several places on the object.

Almost humorously, the newspaper account ascertains that the object “had” to be a meteor which was used by extraterrestrials. Their theory was that these other-worldly beings traveled on meteors, and would eventually land on Earth, and put mankind into wholesale servitude.

A second newspaper report on a strange airship was included in the Denison Daily News of Denison, Texas on January 25, 1878. A Texas farmer, John Martin, was credited with one of the first uses of the term “flying saucer.”

Martin had actually seen a “balloon-shaped” UFO, but used the saucer term to describe the size of the object from his perspective. Martin’s sighting was January 2.

What he saw was a dark object high in the sky.

The headlines of the 25th would read, “A STRANGE PHENOMENON.” A portion of the report is listed here:

“From Mr. John Martin, a farmer who lives some six miles south of this city, we learn the following strange story: Tuesday morning while out hunting, his attention was directed to a dark object high up in the southern sky. The peculiar shape and velocity with which the object seemed to approach riveted his attention and he strained his eves to discover its character.”

“When first noticed, it appeared to be about the size of an orange, which continued to grow in size. After gazing at it for some time Mr. Martin became blind from long looking and left off viewing it for a time in order to rest his eyes. On resuming his view, the object was almost overhead and had increased considerably in size, and appeared to be going through space at wonderful speed.”

The most enduring account of early air ships occurred in the small Texas town of Aurora in 1897. This account would also be carried in newspapers, preserving details of an alleged UFO crash and the burial of an alien being. This ongoing legend would cause the state of Texas to declare the town a “historical site.”

On April 19, 1897, a slow moving space ship crashed into a windmill, bursting into pieces. As the debris was searched through, supposedly the body of a small alien was discovered. Originally the alien pilot was dubbed the “Martian pilot.” Some of the debris also revealed material sketched with a type of hieroglyphic.

The town folk gave the poor little creature a proper burial in the local cemetery.

This incident, whether true or not, has had just enough publicity to stay afloat for over 100 years. It was made into a movie, “The Aurora Encounter” in 1986, starring Jack Elam. The news of the crash spread quickly, even for that time period. A newspaper article of the event still exists, written by E. E. Haydon, reporter for the Dallas Morning News. Below is the original article:

About 6 o’clock this morning the early risers of Aurora were astonished at the sudden appearance of the airship which has been sailing around the country.

It was traveling due north and much nearer the earth than before. Evidently some of the machinery was out of order, for it was making a speed of only ten or twelve miles an hour, and gradually settling toward the earth.

It sailed over the public square and when it reached the north part of town it collided with the tower of Judge Proctor’s windmill and went into pieces with a terrific explosion, scattering debris over several acres of ground, wrecking the windmill and water tank and destroying the judge’s flower garden.

The pilot of the ship is supposed to have been the only one aboard and, while his remains were badly disfigured, enough of the original has been picked up to show that he was not an inhabitant of this world.

How much of the story was real, and how much pure story telling we will never know.

The Aurora incident is still being studied today. There are a number of other American reports, along with much evidence from around the world going back to early civilizations which indicate flying apparatus were being seen in the skies.

There seems to be little doubt that even before mankind had mastered the art of flying, someone, somewhere had. Of course, UFO reports can often times be explained by conventional flying objects, but what known craft could we use for an explanation in the mid to late 1800’s? The Wright Brothers had not yet created their new flying machine. 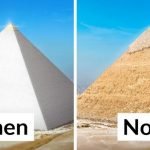 What the Great Pyramid of Giza Would’ve Looked Like When First Built: It Was Gleaming, Reflective White 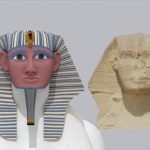 Take a 3D Tour Through Ancient Giza, Including the Great Pyramids, the Sphinx & More