Description: My sighting was a 9:47 P.M. Pacific Daylight Time, West San Fernando Valley. The locations was from the intersection of Hackney Street and Independence Avenue. The object was a ball of VERY BRIGHT white light (just like a star) that at first glance one would think it is Venus only to immediately notice something very wrong here. This light/object was a full four to five times as bright and big as what Venus normally is. It’s light flickered in out and just as the light started completely fading out it then STARTED MOVING fast and towards the North. The best reference point I can provide as to exactly where in the sky it was stationary would be in vicinity of the star Vega at 9:47 PM. This was NOT Venus. As far as from what location this object was seen, the best description from where it was seen from approximately the intersection of Hackney Street and Independence Avenue, 70 degrees up, towards the East. This is in the Canoga Park district of Los Angeles, California. This was not a drone, helicopter, or fixed wing aircraft. A high flying aircraft flying from the Southeast to the Northwest passed right by the same location only 30 seconds to a minute later. There is a good chance the crew in this aircraft saw this object/light in front of them as they were flying directly towards the same area where the object was floating. 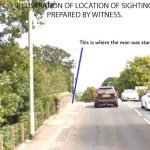 Bright Ball of Light Glides in Front of Man Near His Face. 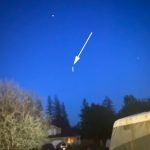