Description: I have seen and experienced more than one encounter. I do not have the exact times or dates so what I have written here is from my own memory. I have no witnesses and I will let my credentials speak for themselves.

My most recent sighting occurred about a couple of weeks ago (October, 2021). There was a full moon (or near it). Again I was sitting on my back deck looking up at the moon when I saw what looked like a small white dot or light. I watched this object cross the sky from the southwest heading towards the northeast. It seemed to be within Earth’s atmosphere and at the next glance it appeared to be out near the moon itself. In a flash it was back to the Earth’s atmosphere and it continued on its way. This happened in a matter of seconds. For an object to travel that far in a matter of seconds is mind boggling. My earlier sightings are chronocoled below:

One time (roughly 1995) I was living in Las Vegas, NV. I had a consumed a couple of beers when I heard a disturbance outside my second floor apartment window, a sliding door out to a small balcony. I went out on the balcony and outside was a light coming from above. There was no noise, but there was a disturbance in the air. The light was so bright I could not look up. There was a man in the parking lot below and he looked up at me and said “That’s no helicopter”. Then it disappeared. I used to live near a police station in Los Angeles and their helicopter would patrol the area almost weekly so I know exactly what a helicopter sounds like and the lights they use for surveillance. The man below was right. This thing was not a helicopter.

Another time I was in the Henderson Fiesta Casino outside of Las Vegas. The year was about 2018. It was evening about 6 PM. I had gone to the bathroom and when I came out, there were two people standing in front of me that seemed to appear out of nowhere. One was a man and the other was a woman. The male was about 6′ 9″ in height. He was very tall, very thin, and his skin was pure white. His eyes were very large, much like the “greys” have been described, but they were blue and not black. He looked at me and smiled although no words were spoken. He was wearing, and this is the funny part, faded green short shorts and a faded orange t-shirt. My reaction was “Wow! they are just like us”. The woman with him was about 5′ 6″ in height. I heard her say “Klingon” clear as a bell. She was wearing robe type garments with a black background and gold embroidery. I stopped for a minute and looked at these two beings and went on my way through the casino. I did not see them again. That confirmed my conviction that we are not the only ones in the universe.

I moved to Colorado in 2019. I live near the Four Corners area in southwest Colorado. There are tons of antennas, dishes, and cell sites. Geographically it is located where radio and telephone long lines converge and are sent out to the appropriate carriers many miles away. I understand this because I was a telephone technician for a good part of my life. I was sitting on my back deck one evening and something caught me out of the corner of my eye to the left. As I look east I have views of the mountains and, closer in, the Mesa Verde hills. This object cruised out and stopped between these two features about 8 to 10 miles out. The object seen from the rear was rectangular in shape. There was a bright white light emanating from inside the rectangle and what looked like two small wings at the sides of the rectangle. It was there just a few seconds and then it sped away in a flash. There was no noise and no disturbance in the air.

I’m a person with a fairly good education, trained in radio and telephony. In addition, I attended the Pepperdine School of Business Management. I worked for the telephone company (3 years with AT&T and 15 years with GTE California, now Verizon). I worked for IGT, the slot machine maker, for 7 years and installed thousands of slot machines during that time. I’m not prone to hallucinations and the events I just described actually happened.

Note: The witness is recounting several experiences. The experience in the casino in Henderson, NV sounds like “Tall White Aliens.” Charles Hall had several encounters with these beings while he was a weather observer on the Nellis AFB test range. These beings have been seen in downtown Las Vegas by others. 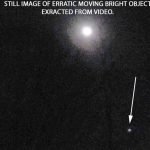