Number of UFO(s), including the Color(s), Size(s) and Shape(s): One orb, white, approximately 20 feet in diameter

Direction of Travel for UFO(s): West to east with sudden ascent into sky before vanishing

Other Known Object(s) (For possible reference, or contrast): Hills in background

Further Description of Sighting: It’s early fall in White Mountain, Alaska and around 6 PM. Late August to early September and I went outside of my uncle’s house for a cigarette. As I walked toward the end of his deck looking south towards the hills, I see an orb of white light traveling above ground about 50 to 75 feet from west to east.

It must have traveled 20 to 30 miles in a matter of seconds. All of a sudden it makes a 90 degree turn towards the sky and as it shoots upward it turns off and disappears. The rate of upward speed was significantly faster and shuts off within a second or two.

There are other orbs that I have seen on a separate occasion. Moose hunting in the fall. September 1st to September 5 of about 2014 for these orbs. Two separate orbs were seen at different times of the same night. The first orb hovered in a distance past a group of tall birch moved about 5 feet and shuts off.

The second orb seen about a half hour later further than the first because it hovered about the mountain top and travel southwest. It shot of in the direction and I lost it behind the mountain. It appears may 2 seconds later in a clearing about 15 miles away and must have traveled a distance of 75 miles. This one also shuts off above the ground. 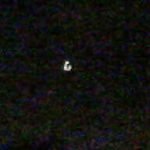